So the new album is out and shipping and people have been getting it. You all ROCK. If you want it go get it here

I've been talking about how 'Painting the Silence' will be continued on the next record. I have so many songs in different stages of being finished. It's a cool 'problem' to have. I have 20 songs that are being considered. Pretty cool.

I know it seems crazy to be talking about this since today is the 'official' release date of the current album. But what can I say? I need to stay busy haha. Also these songs have been being worked on at the same time. Some of them were even still in the running to be on the current album until about 2 months ago when I finally decided on which tracks to use. It's an ongoing process I guess.

Another thing (or 2) I'm working on is very exciting to me. I'm remixing 2 of my older albums. They're pretty great. Over the years though I've gotten a lot better at mixing and recording. I have much better equipment now than I did when they were made. Some of this is simply remixing the sounds that are there. Cleaning them up. Making the mix better. Some of this will be playing all new parts. My album 'Ria' which is available here on the website is one of my favorites. When I made that record I played everything. And that meant drums. Which at the time I couldn't play so well and didn't have a drum kit. So I used drum samples to make the parts. Sure it sounds good. But 'live' drums are so much yummier. So I'm ripping those songs apart and playing drums. I also had a few songs on that and 'February Sessions' that I used keyboard bass instead of a real bass.

Other things are in mix choices, effects I used too much of or incorrectly. Technical things. I've been playing around with them for about a week and the improvement is HUGE!

But the best part of this project is my album 'Reach'. Reach has long been my overall favorite CD. Fans too. Something about it just works. All the songs flow nicely, the songs are great and it has a real raw/emotional feel. However I had the shittiest stuff to record it with!!! Actually I couldn't have changed anything if I wanted to over the last few years because the recorder I used they don't even make anymore and you HAVE to use that to extract the recording. Well I'm happy to say I found one!!! It's supposed to be here tomorrow. I can't tell you how excited I am to be able to take those songs and mix them the right way. Sooooo excited.

All of this got me thinking about songwriting and how it happens. A lot of my friends ask me about it. What do songs mean? How did you come up with that? Things along those lines. Truth is--most of the time I don't know. I rarely sit down with an 'idea' either musically or lyrically. Songs just kinda--happen to me. This doesn't mean the songs don't mean anything. It just means I discover what they're about as they're being worked on. Sometimes much later. My song 'Lifetime (Ria)' is a perfect example. I wrote and finished it. Put it on 'Ria'. This will sound funny, but it took me about 2 years of listening to it until I knew what it meant to me. That's not to say that's the only way to take the song. My brother thinks it's a big anthem that pumps him up for the day. He loves it. Now it is big and anthemic. But to me it's not a 'pump me up' song. We both love the song but we both have a completely different take on it. Which is cool. Songs should be like that.

I was cleaning out my studio the other day and I came across the notebook I used when working on that album. I have to say, for the new one I got away from writing things by hand as much as I used to. I miss it. I'm going to do that from now on. Anyway, it was cool to look through the notebook because I have everything from writing down what I hear in the very first mumbles to the final draft of a song. It's interesting to see what stuck from the mumbles all the way through to the end. Sometimes I get lucky and have really good lines come out. Sometimes its a train wreck. haha.

So here are some shots of different versions of what would become 'Lifetime (Ria)'. It was fun going back for me. 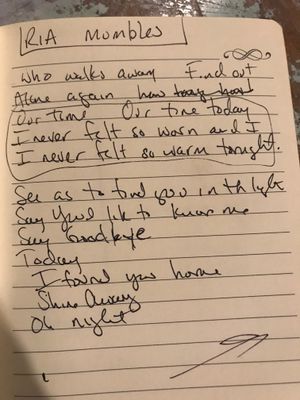 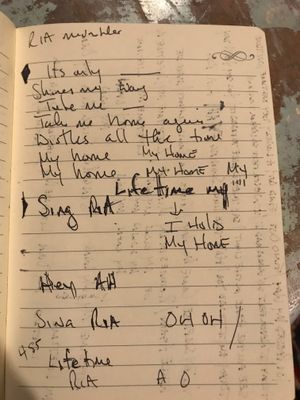 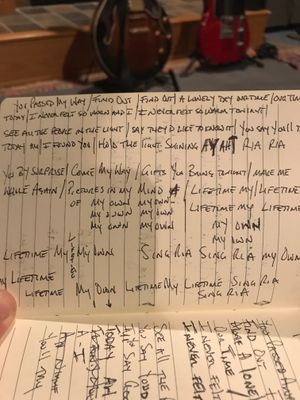 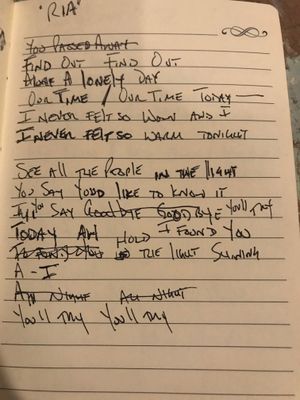 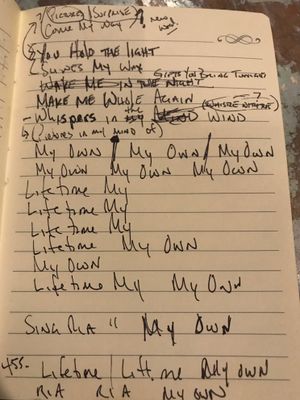