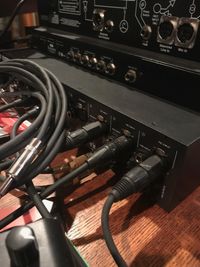 After all the rush and work to get the album out, I promptly got sick. Really sick. It was weird. It was just a cold. But man it took forever to go away. Lasted just over 2 weeks and I was super tired and out of it. Finally feeling back to normal.

I am working on a few things.

First there're tons of songs left over from the new record that I am just starting to re-visit and dig through and listen with fresh ears. I like them. They're all over the place style wise and some are more finished than others. There are probably 20-30 in this group.

Second I got my hands on an old Tascam 788! What the hell is that you ask? Well before home recording became super accessible with good programs like Pro-Tools and others, someone like me couldn't afford them. So I did the best I could and bought one of these. I recorded a whole album on it. Put it out. Loved it. But after I got better stuff and learned more about mixing and recording, I always wanted to go back and 'fix' the mixes. Part of the problem was that while the 'inputs' for this recorder were decent (simply where sounds go in through microphones) The 'finishing' parts kinda sucked. Well I take that back--they were limited. And I also didn't really know what I was doing. haha. So the final mixes were always a little, ok a LOT, screwy. So I got this old recorder off ebay since they don't make them anymore. It was the only way for me to go back and get all the parts into my current set up. I have to say-- I realized 2 things: one was that I was pretty good with microphones because the actual sounds are pretty damn good, two- sometimes being limited is better.

Here's what I mean. This is an 8 track recorder. That pretty much means you can't really have more than 8 sounds on a song. (You CAN but that's a whole other discussion that doesn't really matter right now)  On my current set up I can basically add as many sounds as I want. It's nearly endless how many I COULD have. Going back through these songs and seeing what I did with just 4-6 total different sounds. It made me kinda happy. I was pretty creative!. I think I might self limit going forward. See how much I can do with LESS. And the songs are full and big and complete sounding. It's kinda neat.

So I'm taking apart these songs and remixing them with my new knowledge and equipment. It's fun. It's cool to go back and rediscover songs I haven't really thought about for awhile. See them anew.

So here's the first one I've finished. 'Wake Up'.  I chose this because it's always been one of my favorites and also it's about messed up stuff in the world and hearing it again, well sadly I could've written it today and it still fits. I also always liked how the guitar sounds like an alarm clock at the end.

Listen to Wake Up